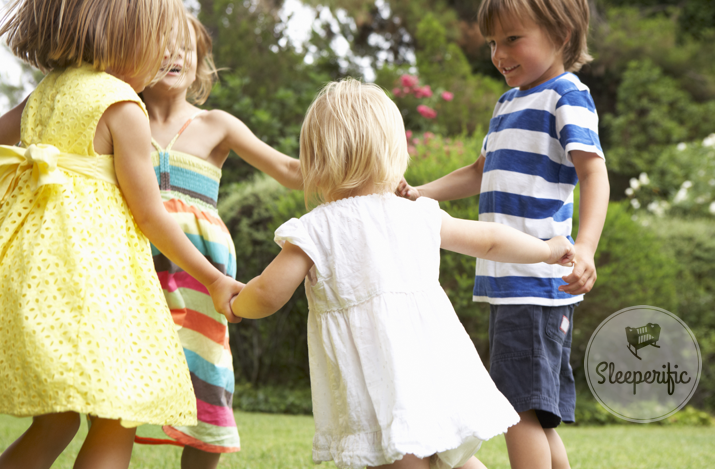 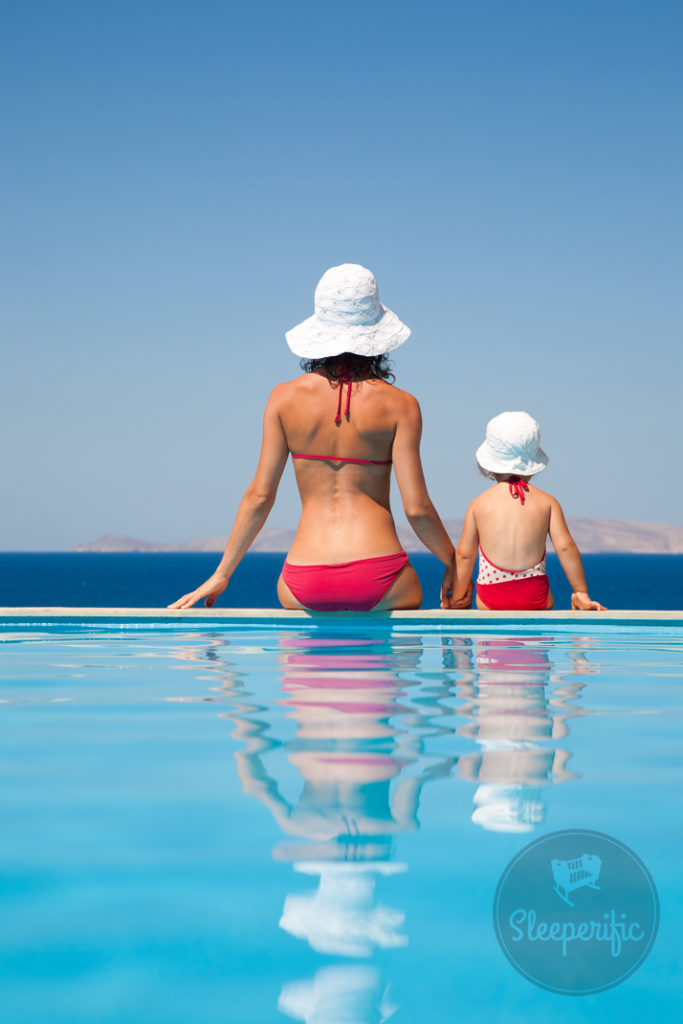 Ah summer. We Canadians wait ALL year for this kind of weather (certainly when comparing it to this). But summer can wreak havoc on child sleep schedules and routines. Here’s some ways summer impacts sleep, and real strategies you can use to try to keep you child on track.

Longer days, early mornings and late nights.  Sounds like a recipe for a great summer, but long term, that can cause trouble for sleep routines.  Pick up some of these or bring some black garbage bags (be prepared to double or even triple layer them) and painter’s tape if you’re travelling.  For those who are travelling to cottages this summer: The sun sets even later and rises earlier in the north and often cottages have bigger windows to enjoy the long days. Don’t let light delay bedtime or encourage an early morning riser.

Apparently 20 degrees is ideal for sleep, which seems far too cool for me, especially with those scorching summer days. Generally about 1 degree cooler than temperature in your home during the day is fine. Adjust your child’s clothing and coverings accordingly.

Late night barbeques at the neighbours, older children biking the streets, even the birds chirping in the early mornings can impact sleep. Mitigate with white noise.  There’s are dedicated white noise machines on the market, but you may be able to repurpose something already within your home.  An oscillating fan (set up out of reach, especially for children in beds), a dehumidifier, even a radio tuned to static with the volume quite low will work.

Travel is a great experience for your family and inevitably, sleep might be more difficult when you’re away from all the comforts of home. Bring what you can (within reason) to keep everyone comfortable.  As much as possible, try not to deviate too much from your regular sleep patterns. I certainly don’t want parents to feel they’re a slave to the sleep schedule while they’re trying to enjoy a vacation.

The biggest rule is to not undo all the good work you’ve been doing.  Some kids are pretty flexible but some aren’t. Trust your comfort zone but also your child and their ability to get back into their routines when you return home.

Have a great summer friends!

The Detrimental Effects that Prescription Medication Can Have on Childrens’ Sleep

A recent story published in the Huffington Post highlighted the alarming rise in the number of children who are routinely prescribed medications such as antipsychotics for disorders such as ADHD, with as many as one of every three visits to child psychiatrists resulting in the receipt of a prescription for such medications. This is the case despite the fact that the FDA has found that drugs such as those approved for conditions such as schizophrenia, can be incorrectly or needlessly prescribed for conditions they were not originally intended for, including ADHD, autism, Asperger Syndrome, etc.

Another more recent study (published in the March, 2015 edition of the American Journal of Public Health) found that very young children (up to the age of four) who were registered with Medicaid in 36 states, are taking psychotropic drugs, despite a complete lack of efficacy and safety data to support their use in such young patients.

The Unnecessary Prescription of Medication

Some of the most common drugs prescribed to children are used to treat ADHD, depression/anxiety and psychosis/bipolar disorder. Black and Hispanic children were one half to one third as likely to be taking some type of psychotropic medication. Researchers concluded that while some of these children may indeed have brain injuries and other conditions which merit the use of this type of medication, “if these medications are being used solely for behavioural control, then it seems that need to better assess these children and see if they might be better served by the use of evidence-based behavioural interventions.”

Harmful Side-Effects of Some Prescription Medication, including Insomnia

There are many other issues surrounding prescription medications, which are a great source of worry for paediatricians and parents alike. One study carried out by scientists at Harvard University has found that four out of five children admitted into hospital are treated with medications which have not been previously tested on kids. It is known that children metabolize medications differently from adults, so that the opposite effect to that desired, may occur. Moreover, it can be all too easy for children to overdose on even seemingly innocuous medications, like cough medicine. Finally, many prescription drugs can interfere with the quality of sleep, leading to serious consequences in the long run (long-term sleep deprivation has been linked to everything from memory loss to an increase in the biomarkers that cause brain damage.

Anti-depressants (such as Prozac, Zoloft and Paxil), also known as SSRIs (Selective Serotonin-Reuptake Inhibitors) are commonly prescribed to children and adults alike; indeed, they are now the first-line treatment for mild-to-moderately serious depression, seasonal affective disorder, bulimia and anxiety. Unfortunately, side-effects include both drowsiness and insomnia and agitation. Medications commonly prescribed for ADHD (which enhance alertness) can also make it more difficult for children to get a good night’s rest.

Many medications commonly used to treat heart conditions or asthma, can cause insomnia, night awakening and nightmares, while decongestants often cause wakefulness at night time. Meanwhile, some over-the-counter medicines (such as cough syrup, which contains alcohol) can hamper REM sleep and cause frequent night waking, and pain relievers made with caffeine can also interfere with sleep. Even herbal medications can have case overstimulation and insomnia; St John’s Wort, often taken for depression, is one such medication, so it is vital to build a greater awareness of the effects that any herbal remedy your child is taking, can have on their sleep patterns.

If your child has ADHD, depression or any other condition for which they have been prescribed a psychotropic medication, make sure to discuss alternative possibilities (such as behavioural therapy) with their doctor; the key is to find the most natural solution possible, through a combination of behavioural changes (changes to routine), the avoidance of stimulant foods such as caffeine and sugar, and natural relaxation techniques (yoga and mindfulness meditation work wonders when it comes to lowering stress levels and establishing the clarity of mind that can lead to a greater sense of sleepiness).

The dedicated team at Sleeperific will devise a personalized plan, if you are worried that your child will never get a good night’s sleep (or allow you to do the same). Through trusted, safe methods and a caring approach, they can help your whole family achieve a greater sense of calm, health and happiness.

Kwikmed, The Facts About Prescription Medication and Children, accessed May, 2015.

Everydayhealth.com, Is Your Medication Making You Lose Sleep?, accessed May, 2015.

Pharmacist.com, Psychotropic drug use among preschool children in the Medicaid program from 36 states, accessed May, 2015.