Dropping naps is a major milestone for any family.

The transition from 3 down to 2 naps is relatively easy to contend with. 2 down to 1 and 1 down to 0 – those transitions can be challenging for even the best of sleepers. I always encourage parents to protect those naps for as long as they can and transition only when absolutely necessary. If you’ve done everything to can to prolong their nap in a daily sleep schedule, you will have to an easier transition. Absolute readiness is key to success.

The transition from 1 to no nap per day is likely to be between 3 and 4 years of age. Although there’s lots of variation – some showing signs of readiness for transition as early as 2 years old, while others are willing to hold onto their second nap until closer to 5 years old. If your child generally seems well rested, is following a schedule that works for your family, I’m not concerned about the number of hours a child allocates to naps and night sleep. Simply getting an adequate quantity of sleep is most important.

Try to hold onto the nap by:

Readiness for No Nap

Signs indicating readiness for a transition to no naps in the day:

If your child is younger than 3 years, it may be worth trying to hold onto that nap. There are MANY significant cognitive leaps between their 2nd and 3rd birthdays. They might be inconsistent with day sleep, but continue to offer it. Many children under 3 will have some days where they may not nap, but that’s not a reason to take rest out of their daily schedule.  It’s not unusual to have phases where naps are irregular. But keeping naps until at least age 3 has shown real benefits in areas of emotional control (hello meltdowns!) and problem solving.

Bedtimes are likely to be reflective of your child’s particular sleep needs, along with their wake times. During a period of transition, you may find you need to keep bedtime cautiously early – just as their bodies adjust to bridging those long periods of wakefulness. I always recommend parents keep quiet time when transitioning away from naps. It gives your child the option to snooze if they need it, but as importantly, they have a chance to foster some independent playing skills, while giving their care provider a much needed break.

Whenever there is a transition, the most important thing to remember is that the QUANTITY of sleep does not change dramatically. Just the ALLOCATION of the sleep is going to be adjusting. It’s very likely that a child who is adjusting to no midday snooze is going to need a very early bedtime to compensate for their missed sleep.

If your afternoons, sans nap, resemble something like this, you might need to think about reintroducing nap time:

Here’s a handy little chart for approximating the quantity of naps for each age group.

The transition from 3 down to 2 naps isn’t such a big deal. 2 down to 1 and 1 down to 0 – those transitions are beasts. I always encourage parents to protect those naps for as long as they can and transition only when absolutely necessary. Ensuring you’ve done everything to can to prolong their 2 nap per day schedule will lead to an easier transition. We want to be 100% ready for these transitions.

The transition from 2 to 1 nap per day is likely to be around 15 months of age. Although there’s lots of variation – some showing signs of readiness for transition as early as before their 1st birthday, while others are willing to hold onto their second nap until closer to 18 months.

Pull out all the stops to preserve that 2 nap per day schedule:

Readiness for One Nap

STILL not making this 2 nap per day schedule work? Readiness to transitioning from 2 down to 1 nap per day means:

I’ve reminded you of this before (and I’ll probably remind you again): sleep needs DO NOT change, just because of a nap transition. Just the ALLOCATION of the sleep is adjusting. The total quantity of sleep in a 24 hour period should remain similar in either a one nap/day or two nap/day schedule.

How did your nap transition go at this age? 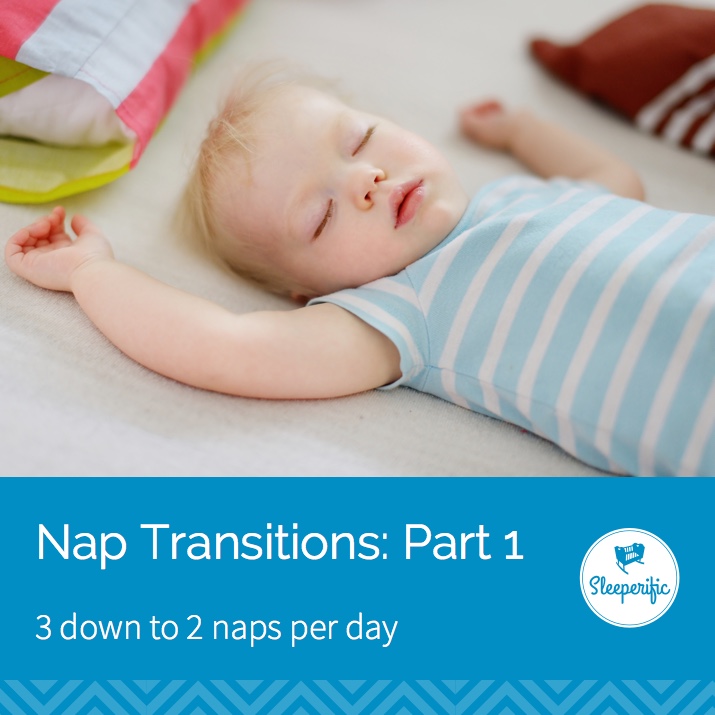 My baby is having trouble taking his 3rd nap in the late afternoon. When we’ve tried skipping it, bedtime is a mess. What should we do with this?  When can we drop the nap?

-3rd nap is not the charm

I’m often asked about these nap transitions. When to drop a nap from a schedule is a popular question for infants, toddlers and even preschoolers. This series of blog posts will discuss what signs to look for, approximate ages and some troubleshooting tips for either transitioning or trying to sustain an age appropriate schedule.

Often infants will adopt a schedule of a morning nap, an early afternoon nap and a later afternoon catnap. While I’m willing to fight to keep nap 1 and 2, nap 3, meh. As soon as that third nap dwindles or becomes difficult, I find it’s best to say see ya later.

What are some signs the nap is a problem?

Generally, one of two things will start to happen. Your baby will either resist their nap (and stay awake, or maybe even protest through) their nap. Or your baby will love their last nap so much that it starts to interfere with an early bedtime. If this nap becomes too difficult, it’s not worth it.

When is it age appropriate?

Typically, a third nap can start to dwindle as early as 4 months (it’s early, but it’s not unheard of – this munchkin was the WORST third napper but had a pretty strong nap 1 and 2), but some babies are perfectly happy to keep a 3rd nap until 8 months old. Some families really like maintaining their 3 nap schedule because a parent doesn’t arrive home until later in the evening. It can be a great way to sustain a slightly later bedtime.

This is the easiest nap to eliminate, especially if it’s 6 months or later. It’s likely you’ll nudge out nap 1 and 2 a little, spacing them out over the day. It’s also likely that your baby will need an earlier bedtime.

The most important detail to remember in any transition is that a child’s sleep needs DO NOT change, just because they’re transitioning to one less nap in the day. They can’t suddenly remove 30 minutes of sleep from their schedule.  This transition is about a child being able to stay awake for longer periods. Sleep minutes that were typically part of nap 3 will need to be allocated somewhere else into the day (maybe other naps [see how to lengthen naps], but most likely, these reallocated minutes will end up in their night sleep).

Stay tuned in coming weeks for the follow up posts on transitioning from 2 down to 1 nap and 1 down to no nap.

Ahh, naps, a parent’s favourite time of day. There’s always a million things to do at nap time. But when your baby or toddler is waking up 30 minutes after a short snooze, that’s not much of an opportunity to do what we need to do as parents, nor is it likely enough for your child to make it through to their next nap, or bedtime.

Why Short Naps (aka Snaps)?

Child sleep cycles during the day are about 30-45 minutes in length. Often the exact length of the nap will be predicted by the length of your child’s sleep cycle. My son’s sleep cycle was 38 minutes, my youngest was 31 minutes. Parents can often set the watches by the nap length of their munchkins.

Your child will start out awake, enter a deeper state of sleep and then come around to a lighter stage of sleep again. At this point they may enter another sleep cycle, or surface completely from that sleep. Most babies would likely signal (crying or maybe words depending on age) for their parent. Some of you might have a child who stirs and is able to move along to the next sleep cycle. Some of you might have a child where you don’t even notice their transition onto their next sleep cycle.

This means a 30-45 minute nap is normal. Expected. Biologically appropriate. But we want more! Most kids can’t get by on a short nap. It will mean their next nap needs to be soon or they will be stretched to overtiredness by the time bedtime rolls around.

How do I get a long nap?

Even after night sleep has come together, lengthening naps can still be challenging. Night sleep and nap sleep are governed by different parts of the brain. That could mean your child is a champ with nights and a chronically short napper.  Naps are hard for some kids, requiring lots of consistency and patience for them to finally stretch out. Give your little one a chance to practice, but always make sure you’re setting them up for success!