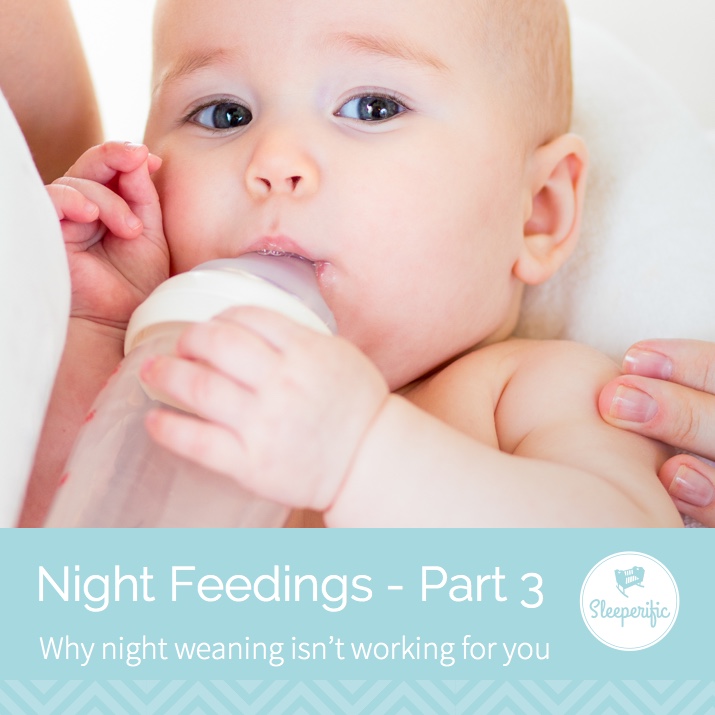 Food and particularly night feedings, can be a really emotional topic for parents.  I get it.  Food is love. Feeding is nurturing. I feel it when I open the refrigerator when I’m stressed (I’m working on it!), but I especially felt it that time when I had a little, sick baby.  The daily weigh-ins were emotionally charged, like I was getting a numerical grade that assessed my parenting.  Eventually, everyone was pretty healthy and growing but no one was sleeping well.  Night feedings can (and did, in our case) hold us back from having healthy sleep habits.

Remember it becomes biologically appropriate to begin to prioritize sleep at night and feedings during the day. Generally, I see this point between 6-9 months of age.  There’s always outliers… the munchkins who are ready to wean earlier, or happily keeping a night feeding later.  But that’s my completely unscientific, anecdotal observations: 6-9 months of age is when night feedings can become problematic.  Persisting with keeping night feedings beyond 6 months, is unsuccessful more often than it’s successful.

So you’ve done all the right things up to this point, determining if dropping a night feeding is right for you family and reducing quantity.  But your child keeps on waking at night and you’re not sure you’re doing wrong or why this isn’t working yet?  Consider these:

That concludes my series on night feeding.  Unless you can think of other aspects of night feeding you’d like me to blog about!  Comment below with any of your experiences with night weaning or other ideas for blog posts you’d like to see.